By SailInTurkey Admin On May 9th, 2017 in Explore Turkey, News & Events 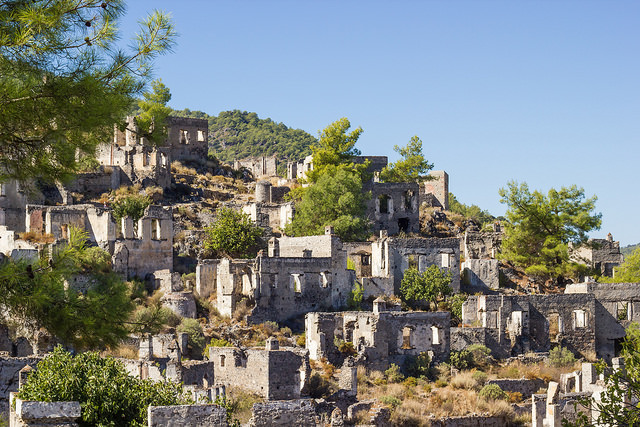 The abandoned stone buildings of this once-bustling town are roofless and weathered and the narrow streets worn with age. But this is not an ancient city—Kayaköy in Turkey is a modern ruin, deserted for political reasons.

Formerly known as Livissi, Kayaköy was a thriving community of some 10,000 until the early 1920s. Both Anatolian Muslims and Greek Orthodox Christians had lived here in harmony since its origins in the 18th Century. The Muslims, who lived on the surrounding valley floor of the Kaya (“Rock”) Valley, tended to be farmers, while the Christians, who inhabited the hillside, were mostly artisans; the two communities were closely linked by trade and helped each other in times of need. Christian and Muslim women exchanged food and sweets at weddings and religious festivities; Muslim musicians played at Orthodox festivities and took part in wrestling matches during Easter celebrations; children played together in the lanes; and men of both religions congregated at local cafés, fingering their worry beads, smoking water pipes and playing backgammon.

Then came World War I, the collapse of the Ottoman Empire, and the land grabs of the Greco-Turkish War (1919–1922). Greece suffered a resounding defeat in the conflict, and had to hand territory it gained during the war back to Turkey. Residual violence and retribution was often aimed at the remaining Greek Orthodox community within the new Turkish borders, and in turn, against the Muslim Turks in Greece.

In order to stanch the bloodshed, the Greek and Turkish governments signed a population-exchange agreement in January 1923. According to the terms of the deal, Greek Orthodox residents of Turkey had to relocate to Greece, while Muslim residents of Greece had to move to Turkey. Relocation was compulsory and began in May 1923, although, by that time, hundreds of thousands had already fled of their own accord.

Today Kayaköy village serves as a museum and is a historical monument. Around 500 houses remain as ruins and are under the protection of the Turkish government, including two  Greek Orthodox churches which remain the most important sites of the ghost town. There is a private museum on the history of the town. In the middle of the village stands a fountain source from the 17th century. UNESCO adopted Kayaköy as a World Friendship and Peace Village.

On 9 September 2014, the Turkish government announced plans to develop the village. It plans to offer a 49-year lease that will “partially open Kayaköy’s archeological site to construction” and anticipated “construction of a hotel, as well as tourist facilities that will encompass one-third of the village.”

How to get There:

Take a bus from Fethiye which takes approx 20 minutes.

Alternatively, sail to Cold Water Bay and walk from there.  Ali the restaurant Owner will point you in the right direction for the path over the hill. It will take approx 1 hour.  We recommend that you do the walk early morning or late afternoon when the sun is not so hot and wear sturdy footwear.

All content Copyright © Sail In Turkey, 2022 All rights reserved.