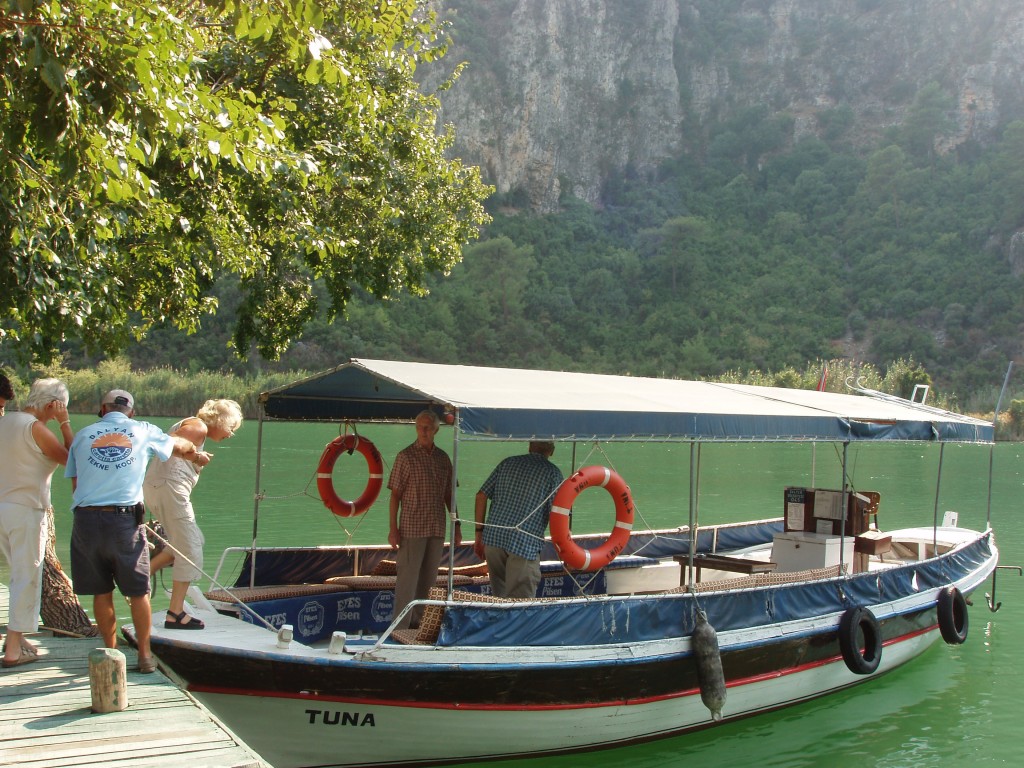 We recommend mooring at My Marina, as a safe place to leave your yacht whilst on the trip. They have great facilities to their guests & the view from the restaurant is stunning.

You will benefit from an early morning start, before the heat of the day kicks in.  You arrange a 1/2 day or full day trip on the Dalyan River.  It starts with passing through the reed beds in a traditional Turkish boat, passing the Lycian Rock Tombs & visiting the ruins of ancient Kaunos.

Look out for Turtles that are a protected species on  Iztuzu beach at the mouth of the river. View the Lycian tombs carved into the cliffs dating back to 400 BC. Enjoy a mud bath and a chance to do some souvenir shopping in the village of Dalyan. 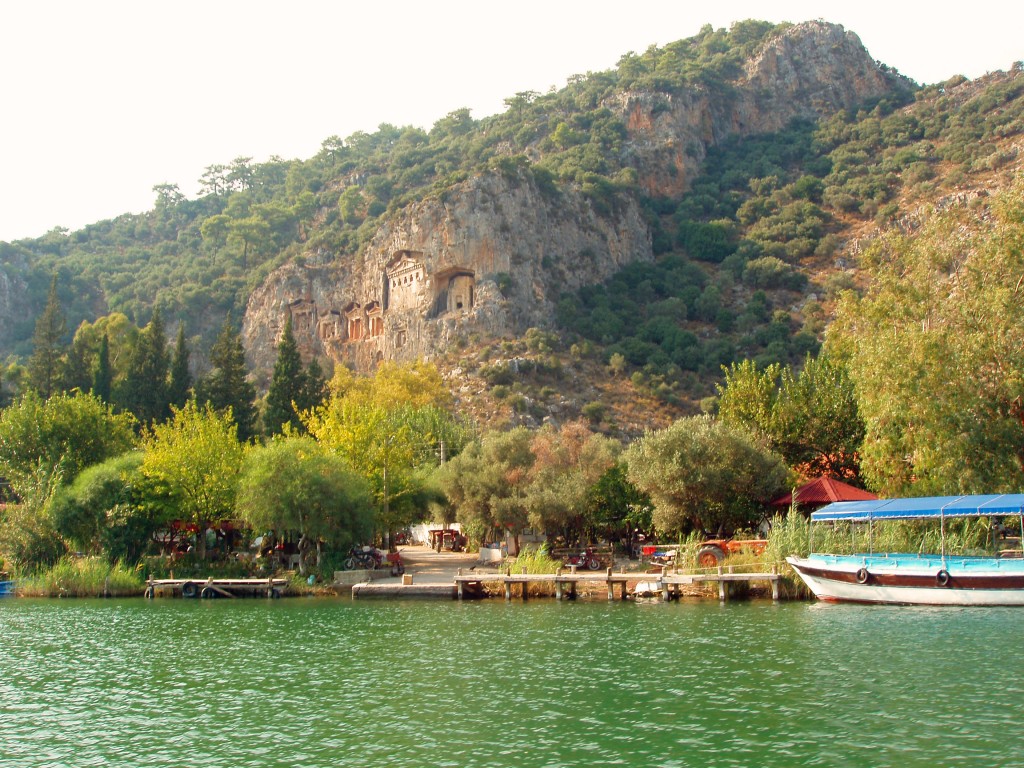 Dating back till the 10th century BC  Kaunos, was once an important sea port,   It is now located about 8 km from the coast due to the formation of Iztuzu Beach and the silting of the former Bay of Dalyan, from approx. 200 BC onwards.

The Kaunos archaeological site contains the remains of this ancient city which has witnessed the rise and fall of several empires, cultures and civilisations over almost 3,000 years of history.

Carian was an important trading port, later conquered by the Persian Empire.  The city was altered by the increasing influence of Hellenic culture in the region leading to many ancient Greek-era structures, you can find these ruins within the site.

Kaunos was incorporated into the Roman Empire and later was part of the Byzantine territories. With the Muslim invasions and later the rise of the Ottoman Empire, Kaunos was re-fortified and walls were constructed on the Acropolis.

Ancient writers attested the Malarial nature of Kaunos and it was this, along with earthquakes and the gradual silting of its harbour, which eventually led to the city’s abandonment.

Today, the ruins at Kaunos include a well preserved ampitheatre, which displays both Roman and Hellenistic features, a temple dedicated to Apollo, a Byzantine basilica and Roman baths as well as the spectacular rock tombs.  Outside the archaeological site are situated the tombs are known as the Kings’ Tombs.

North-west of the main settlement are the 4th century BC city walls which stretch for 3km and have been very well preserved in places.

Excavations at the site are still continuing and may lead to further areas being opened to the public at a later date. 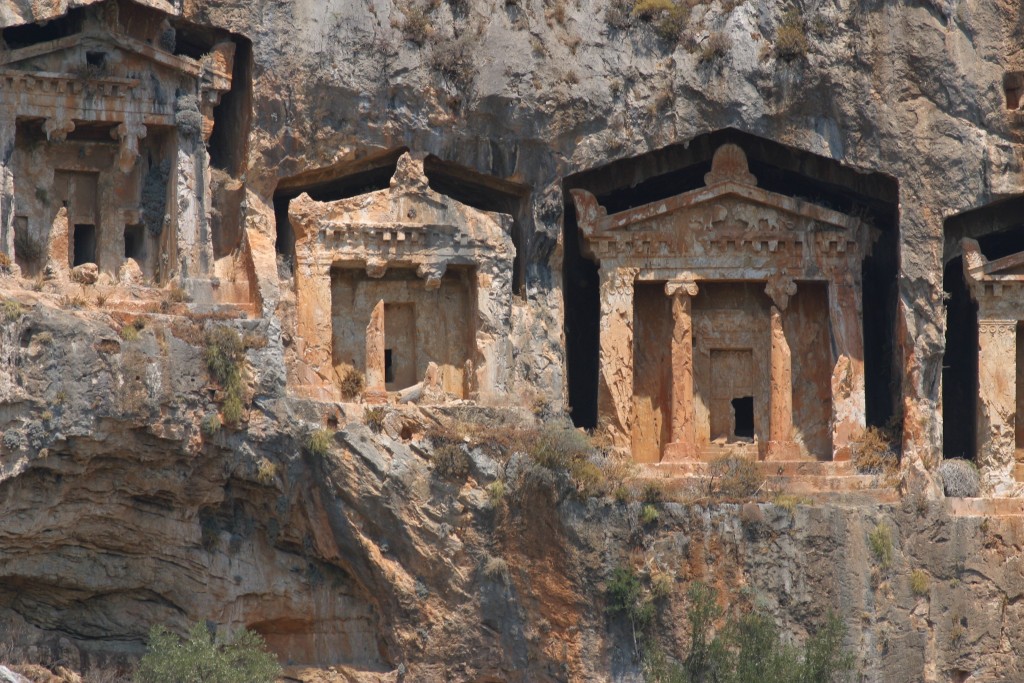 Carved into the side of a Turkish mountain are what look to be the entrances to countless temples.  They are in fact the ornate facade of ancient Lycian tombs.

Lycians believed that the souls of their dead would be transported from the tombs to the afterworld by magic winged creatures.  For this reason they often placed their honoured dead in geographically high places such as the cliffside. Round shaped altars decorated with inscriptions were sometimes placed near the tombs.  These were used for offerings for the dead.  In some of the tombs items such as tear collection bottles, jewellery, coins & ornaments have been found.

Dating back to the 4th century, many of the numerous entryways are adorned with tall Romanesque columns and intricate reliefs. The older tombs are often no more than unmarked holes dug into the rock. Inside tombs are spacious chambers cut into the rock with a simple monolith inside to display the body. The rooms are now empty from hundreds of years worth of looting. 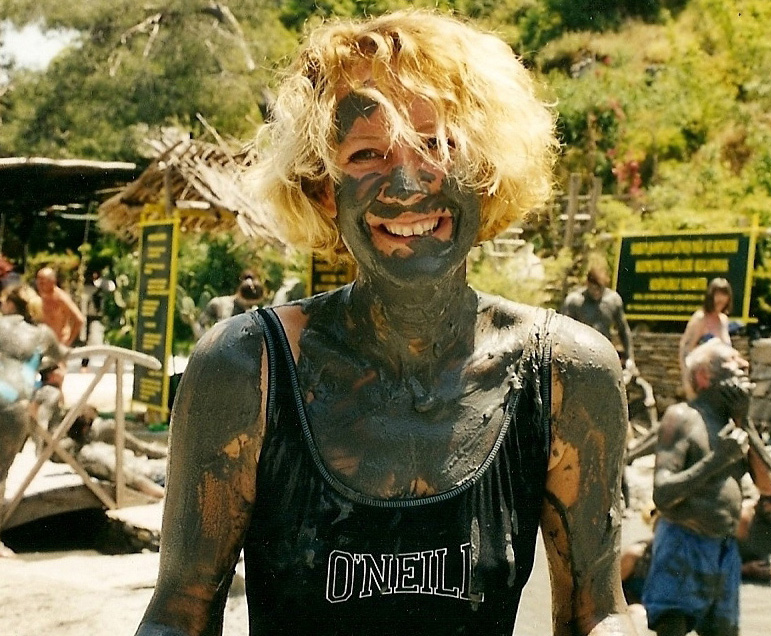 Visit the mud at Dalyan and look 10 years younger – that is what they say!   It is claimed that regular mud therapy can help reduce lines & wrinkles.   In addition the healing waters of the spring are said to help sciatica, rheumatism and stomach problems.

Once you have covered yourself in the mud you then wait for it to dry in the sun. The sulphur pool in which you clean yourself after your Mud Bath is also at a temperature of 40 degrees. There are showers to rinse.

Latest posts by Stef (see all)

All content Copyright © Sail In Turkey, 2021 All rights reserved.

We use cookies to enhance your experience whilst on our site, and improve our services by analysing our site traffic we also use them to enable social media features.
By closing this banner, scrolling or clicking a link or continuing to browse you agree to the use of cookies.AcceptRefuseCookie Policy
Revoke Cookies